Yahoo continues to be a source of excellent information on recent and future versions of JavaScript / ECMAScript. Here are two very good talks from November 2009 about the evolution of JavaScript from 2000 until now:

Brendan Eich on ECMAScript 4 / 5 and Harmony

In the late 1980’s Jordan Mechner single-handedly designed and programmed the original Apple II version of Prince of Persia and several other groundbreaking games. He published his development journals and technical design documents on his web site.

The journals touch on:

Although many games are now written by large teams of people, in the end, a lot of the business, artistic, and technical issues Jordan writes about remain relevant. I highly recommend these journals for anyone interested in an inside view of game development. (Or anyone interested in trying to break into Hollywood. :-) ) 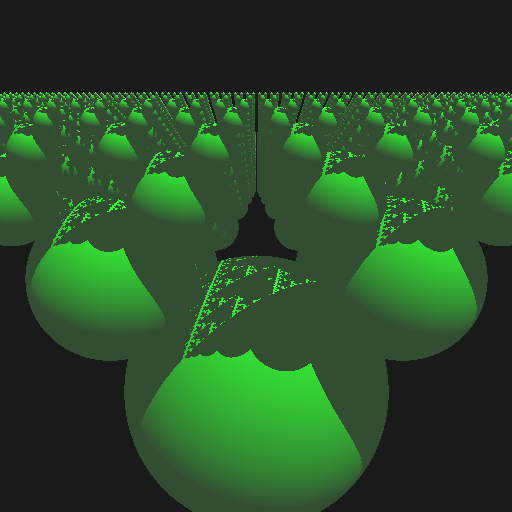 Above is the output of the raytracer. Below is a diagnostic mode showing which goroutines raytraced which section of the screen. Each goroutine has its own color to outline the pixels it traces: 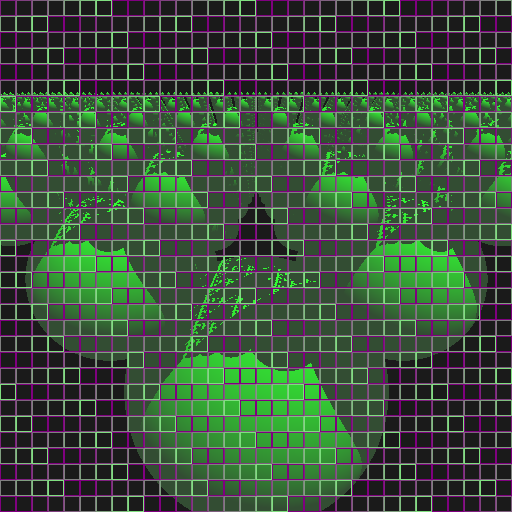 It runs single-threaded about 1/2 the speed of a comparable C++ version. I guess the C++ version benefits from a more optimizing compiler and the ability to inline small functions.

Compared to ordinary C/C++, the Go version was easier to multithread.

On my dual-core Macbook Pro I get an 1.80x speedup when running with GOMAXPROCS > 1:

On an eight-core, 16 Hyperthread HP Z600 running Ubuntu 9.10, (with the source code changed to use 16 goroutines instead of the default 8 goroutines) I get a 5.8x speedup:

How about that new Verizon Droid?

I’ve been working part time on the “Droid” project for the last year, and it finally shipped today. I wrote some of the graphics libraries.

At first I was skeptical of the industrial design. The early prototypes looked very much like a 1970’s American car dashboard. But Motorola really improved the industrial design in subsequent versions. I like the high-grip rubber on the battery cover. It makes the phone very comfortable to hold.

The phone hardware is very fast, and the high resolution screen is beautiful. I think people will enjoy owning and using this phone.

Wired article about Demand Media's automated How To videos

Man, the web really does change everything!

They say that the algorithm produces lifetime values about 5 times higher than human editors do.

These guys have basically automated the “How to” video market. Amazing! I wonder if they will move up the video food chain into music videos, TV shows or movies? It might work for low budget children’s programming.

Or even for casual games. Hmm.

I was pleasantly surprised to see that the latest version of Ubuntu, 9.10 b1, comes with a nice selection of desktop backgrounds. This makes a huge difference in how beginners perceive the product, at very little cost to Ubuntu. The new dark-brown default color scheme is also an improvement over the older schemes.

I published my first Android app

Now that the Android Native Development Kit has been released, I was finally able to publish the sources and binary to my Android Terminal Emulator. It’s a fairly plain Digital Equipment Corporation VT-100 terminal emulator, with some features from newer terminals (like colors.)

This is my first application in the Android Market. There are at least 10 other terminal emulators in the market; we’ll see how this one is received.

A bit of history: This was my first Android application. I wrote it for the original “Sooner” Android devices, and have kept it updated for the successive generations of devices. It requires native code because there’s no public Android Java APIs for dealing with PTYs.

A bit of ancient history: I wrote two terminal emulators for the Atari 800 back in the day: Chameleon, in 6502 assembly, and a version of Kermit in the excellent “Action!” programming language. Kermit was one of my first “open source” programs. If you poke around on the web you can still find it here and there.

GLES Quake - a port of Quake to the Android platform

I’ve just published the source code to a port of Quake to the Android platform. This is something I did a while ago as a internal test application.

It’s not very useful as a game, because there hasn’t been any attempt to optimize the controls for the mobile phone. It’s also awkward to install because the end user has to supply the Quake data files on their own.

Still, I thought people might enjoy seeing a full-sized example of how to write a native code video game for the Android platform. So there it is, in all its retro glory.

(Porting Quake II or Quake III is left as an exercise for the reader. :-)

What’s different about this particular port of Quake?

Converted the original application into a DLL

I was able to make the game work by using Java for:

And then I use C++ for the rest. The interface between Java and C is pretty simple. There are calls for:

The Java-to-C API is a little hacky. At the time I developed this game I didn’t know very much about how to use JNI, so I didn’t implement any C-to- Java calls, preferring to pass status back in return values. For example the “step” function returns a trinary value indicating:

This might better have been handled by providing a series of Java methods that the C code could call back. (But using the return value was easier. :-))

Similarly, the “step” function takes arguments that give the current screen size. This is used to tell the game when the screen size has changed. It would be cleaner if this was communicated by a separate API call.

Converted the Quake code from C to C++

I did this early in development, because I’m more comfortable writing in C++ than in C. I like the ability to use classes occasionally. The game remains 99% pure C, since I didn’t rewrite very much of it. Also, as part of the general cleanup I fixed all gcc warnings. This was fairly easy to do, with the exception of aliasing warnings related to the “Quake C” interpreter FFI.

Converted the graphics from OpenGL to OpenGL ES

This was necessary to run on the Android platform. I did a straightforward port. The most difficult part of the port was implementing texture conversion routines that replicated OpenGL functionality not present in OpenGL ES. (Converting RGB textures to RGBA textures, synthesizing MIP-maps and so forth.)

The original glQuake game allocated textures as needed, never releasing old textures. It relied upon the OpenGL driver to manage the texture memory, which in turn relied on the Operating System’s virtual memory to store all the textures. But Android does not have enough RAM to store all the game’s textures at once, and the Android OS does not implement a swap system to offload RAM to the Flash or SD Card. I worked around this by implementing my own ad-hoc swap system. I wrote a texture manager that uses a memory mapped file (backed by a file on the SD Card) to store the textures, and maintained a limited size LRU cache of active textures in the OpenGL ES context.

Quake expects to talk to a PC keyboard as its primary input device. It handles raw key-down and key-up events, and handles the shift keys itself. This was a problem for Android because mobile phone devices have a much smaller keyboard. So a character like ‘[’ might be unshifted on a PC keyboard, but is shifted on the Android keyboard.

I solved this by translating Android keys into PC keys, and by rewriting the config.cfg file to use a different set of default keys to play the game. But my solution is not perfect, because it is essentially hard-coded to a particular Android device. (The T-Mobile G1). As Android devices proliferate there are likely to be new Android devices with alternate keyboard layouts, and they will not necessarily be able to control the game effectively using a G1-optimized control scheme.

A better approach would be to redesign the game control scheme to avoid needing keyboard input.

A Few Words about Debugging

I did the initial bring-up of Android Quake on a Macintosh, using XCode and a special build of Android called “the simulator”, which runs a limited version of the entire Android system as a native Mac OS application. This was helpful because I was able to use the XCode visual debugger to debug the game.

Once the game was limping along, I switched to debugging using “printf”-style log-based debugging and the emulator, and once T-Mobile G1 hardware became available I switched to using real hardware.

Using printf-style debugging was awkward, but sufficient for my needs. It would be very nice to have a source-level native code debugger that worked with Eclipse.

Oh, and I sure wish I had a Microsoft PIX-style graphics debugger! It would have been very helpful during those head-scratching “why is the screen black” debugging sessions.

Intel showed their new Larrabee GPU publicly for the first time at their annual developer conference. They showed Larrabee running a ray tracer that was rendering QuakeWars geometry. The enthusiast scene (e.g. beyond3d) was not impressed by this demo, because, frankly, it wasn’t very impressive at an emotional level. The scene was static, no people in it, just waves and a few very small helicopters. It’s strange that they didn’t even move the camera, which is something that a ray tracing engine should easily be able to to. The camera angle they chose was effective for showing dynamic reflections, but keeping the camera locked down meant a much less interesting demo. For the same amount of effort they could have come up with a much more visually and emotionally interesting demo. For example, a cascade of brightly colored chrome balls tumbling down a staircase, which would show off both physics and ray tracing. That they didn’t use this early opportunity to sell Larrabee indicates that they don’t know how to market add-on GPUs to consumers. Which makes sense, since it has been many years since they’ve needed to do this. Their current demos are all targeted to (a) test out Larrabee features, and (b) educate developers as to the potential strengths of Larrabee. They are similar to Microsoft DirectX samples. But I think Intal also needs to develop showy “AMD/ATI Ruby” style demos to win the hearts of enthusiasts. Groo at semiaccurate.com suggests that the IDF demo was shown on early, barely functional Larrabee silicon. If true, that could help explain why the demo was so limited. But by this time in the GPU’s lifecycle there should be more marketing – even if totally pre-rendered – showing what the GPU will do. So far the bland GDC2009 meteor demo is the only thing we’ve seen. I think Larrabee needs more sizzle, like this early Sony Playstation 2 demo reel. (Sony also had some great interactive tech demos of things like feathers and pollen particles, but I haven’t been able to find online videos in my limited searching.) Intel’s current marketing approach seems to indicate that they are not serious about competing for the enthusiast add-on GPU market. Perhaps they are just waiting until it’s closer to the time Larrabee is available for market, but my guess is that they just don’t understand how to play the game. It would be a shame if Larrabee is a technical success but a sales failure due to poor marketing execution.

Final scores are out, and my team Blue Iris scored 80 out of 328 in this year’s ICFP contest. Not as good as last year, ah well. :-) Next year: More sleep!

And here’s a video of the contest results presentation from ICFP.