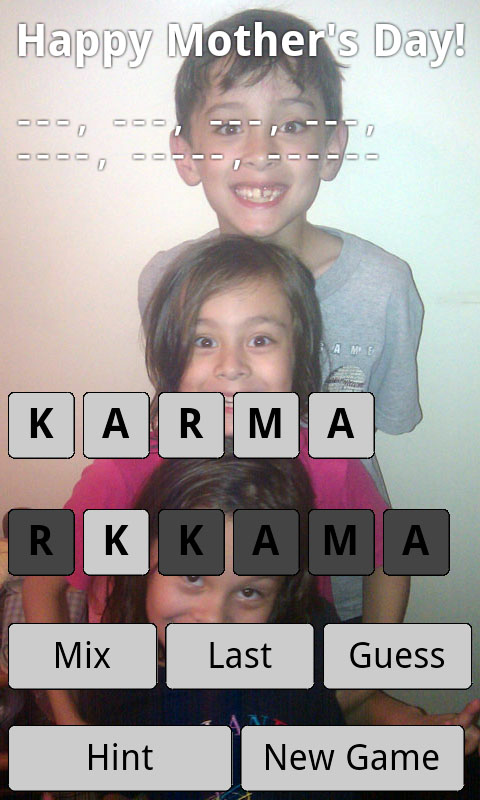 Happy Mother’s Day everyone! This year I wrote an Android app for my wife for Mother’s Day. How geeky is that?

The reason I wrote it is that my wife’s favorite Android application, Word Mix Lite, recently added annoying banner ads. While the sensible thing to do might have been to switch to another app, or perhaps upgrade to the paid version of Word Mix, I thought it might be interesting to see if I could write my own replacement.

And as long as I was writing the app, I though I’d try writing it using JavaScript. Normally Android applications are written in Java, but it’s also possible to write them in JavaScript, by using a shell application such as PhoneGap.

Why use JavaScript instead of Java? Well, hack value mostly. On the plus side it’s a fun to write! Another potential plus is that it is theoretically possible to run the same PhoneGap application on both Android and Apple.

The drawback is that PhoneGap is not very popular yet, especially among Android developers, and so there is relatively little documentation. I ran into problems related to touch events and click events that I still haven’t completely solved.

It took about three days to write the application. The first day was spent:

The second day was spent writing the core of the word jumble game.

The third day was spent:

In the end there were unfortunately a few button-event UI glitches I couldn’t solve in time for Mother’s Day. When I get some spare time I’d like to revisit this project and see if I could use the JQTouch library to solve my UI glitches. I’d also like to make an open source release of a reskinned (non-Mother’s Day themed) version of this app. And then who knows? Maybe I’ll release it for the other phones that PhoneGap supports as well. :-)