My son and I competed as team “Blue Iris” in the ICFP 2017 programming contest. 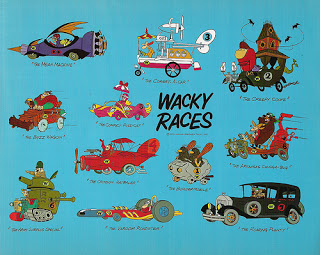 I’ve competed in this contest about six times over the past 10 years. This year was the first year my son joined me. My son’s got about a year’s worth of programming experience, mostly in Java. He was eager to compete in the contest with me this year.

This year we happened to be on vacation in Taiwan during the contest. It’s hot and humid in Taiwan, but the internet infrastructure is great, so we expected to not have any problem competing.

The contest started at 8pm Friday night Taiwan time. I prepared by buying a 2 liter bottle of Coke Zero at the local Wellcome market, and we eagerly waited for the contest to begin.

Each year the problem to be solved is revealed as the contest begins. The type of problem varies by year. This year’s problem was to write a program that claimed edges on a graph. The goal was to construct a path from a “mine” node to a set of “customer” nodes. Scoring was based on the number of customers served.

After reading the problem description, we had to decide what programming language to use. We were originally considering Python. But because the problem had strict execution time limits, we decided that it would be better to use a faster running language.

I decided to go with Go, for the following reasons:

We got to work, reading the problem specification and starting to write the basic program.

I had hoped to do pair programming, but that didn’t work out. The time scale wasn’t right. I’d say “OK, now I’m going to write the structs we’re going to use to read in the JSON”, and then I wouldn’t say anything else for an hour, while I was doing that. Imagine how boring that was for my son!

I also regret that the time pressure meant that I couldn’t answer my son’s tangential questions – “What’s a graph?”, “What’s functional programming?”, “What’s JSON stand for?”. I should probably have given up on trying to compete, and instead used the time to educate my son. D’Oh!

Friday night we got as far as communicating with the contest’s servers and reading in the problem’s JSON configuration file. My son was helpful in monitoring the contest web site and twitter for announcements. He also helped read the spec and serve as a foil for debugging.

Saturday morning we got up early, had a quick breakfast, and got to work. We made steady progress, although as is typical we lost a few hours to dumb mistakes. The worst one was a stray printf that broke the offline mode of the app.

My son installed an IRC client (his first time using IRC) and he enjoyed monitoring the contest IRC channel. He helped other contestants overcome issues that we had already encountered.

By lunchtime we had our first working program, that simply picked the first unclaimed edge on the map. It did surprisingly well against some opponents on some maps. 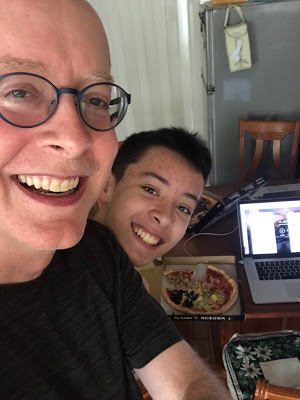 We ate delicious pizzas from the local Maryjane Pizza restaurant, and then went back to work.

By 6 PM we had our final lightning round, which tried to create paths from mines to consumers. It worked, but not very well. Still, good enough for the lightning round.

We spent a few hours decompressing and researching graph algorithms to use in the main contest, and then went to bed.

On Sunday morning (day 2 of the contest) we decided not to continue with the main contest. Our reason for quitting was a combination of burnout and disinterest, combined with the sense that some teams were doing much better at solving the problem.

Also, as my son diplomatically put it, “the problem was not the most interesting”. I think we would have had more fun with a more competitive or physics oriented problem. To be fair, this year’s problem as roughly in the middle of all the problems that have been presented. It’s certainly more interesting than 2010’s or 2013’s abstract math problems.